Small is the New Big in Social Media: Smaller Indiana

My fascination with social media has grown leaps and bounds (through Myspace, Facebook, and now FriendFeed) since I graduated college and entered the work force in Indianapolis. Enter Smaller Indiana.

Smaller Indiana is a NING network created by Indianapolis locals Pat Coyle and Douglas Karr. I have been a part of the community since its inception in late 2007. The purpose behind Smaller Indiana:

Smaller Indiana makes creative people and innovative ideas easier to find. This is the place for you to share your ideas and engage with Indiana’s most creative and inspired souls…working together to build community,culture and commerce.

Smaller Indiana has become a breeding ground for creative individuals to collaborate to make Indianapolis a better place to work, live, and (frankly) exist. I have become intimately involved in all the processes feeding in and out of this network and have been amazed by the success it has garnered in the community. The Indianapolis Star and Indianapolis Business Journal have written frequently about the social network site catered to Indianapolis professionals. Talk about a great way to get social media into the minds of non-users! 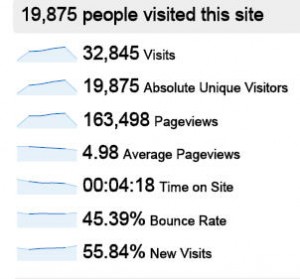 As you can see to the right we have decent traffic, in the month of August, for a site with 3200 members. The growth of the site has been steady and the overall membership was built from a starting point of 30 people.

Smaller Indiana was also involved in the organic/viral marketing push for Indianapolis to become the site of the 2012 Superbowl! As many of know by now, we got it! Smaller Indiana members blogged about the benefits of hosting the Superbowl in Indianapolis and also posted comments on the main Superbowl committee site.

I get a lot of information from other sites on the net including FriendFeed and LinkedIN. I do not, however, get the local flavor and community building that Smaller Indiana has offered me through the past 8 months.

If you want to gain offline connections through your social media experience I encourage everyone to find a geographically based social network like Smaller Indiana.

Great post. This hit my google reader right behind an entry from Peg Cowin a Score Consultant in Chicago in which she listed at least 15 different sites for small business owners. http://tinyurl.com/6xtvsj

You suggestion to find at least one geographical network to facilitate F2F connections to complement the on-line provides a the perfect way for small business owners to evaluate a select a community from this list.

The one thing I like about Smaller Indiana is that it imbues a sense of credibility and trust in its members. I have not heard any stories of awkward, uncomfortable meetings, so it seems to be a site that people take seriously.

[…] Small is the New Big in Social Media: Smaller Indiana […]